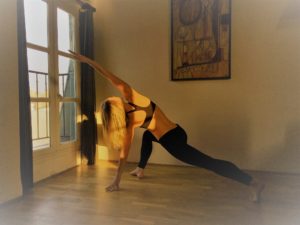 Yoga has given me the gift of now, but I wasn’t always able to be present. Someone once asked me how often I thought I was in the present moment. At the time, my best guess was about five per cent of the time. I was practicing yoga regularly, and that was pretty much the only reason my percentage was as high as five. Most of the time I was busy, and the mental chatter of plans, ideas, memories and worries distracted me.

The question made me think. How could I become more present? And what would be the benefit of doing so? So I began practicing mindfulness.

Receiving the Gift of Now

Like many people, my early yoga practice focused on physical postures. I knew there was more to yoga, but I hadn’t given mindfulness or meditation enough attention. Once I realized how absent I was from my own life, I began actively looking for more opportunities to be mindful.

I sought out and participated in as many meditation sessions as possible at the yoga retreat centers where I was living. I also began to deliberately include at least a few minutes of meditation at the end of my yoga asana practice. Even though it was only a few minutes, I noticed right away I was in a better state of mind after each practice. The meditation gave me a chance to absorb the benefits of the practice, leaving me in a much better frame of mind to continue with my day. I was beginning to receive the gift of now.

Pratyahara: Getting to Now by Withdrawing from Distractions

Just as important as meditation for me was to stay away from the things that distract me. That is, I began to consciously practice pratyahara (withdrawal of the senses) as well. In my case, a major distraction was my phone and social media. I am embarrassed to admit that sometimes I barely noticed the people around me because I was messaging someone on Facebook or scrolling through random strangers’ images on Instagram.

So I resolved to leave my phone behind as often as possible. I allocated specific times for messaging people during the day, and then made sure to be with the people who were physically present with me the rest of the time. And I had a revelation. It turns out when you give the people around you your full attention and really listen to what they are saying, they are far more interesting than the vacation photos of strangers! When you allow yourself to be fascinated by what someone has to say, the person becomes fascinating. The gift of now kept giving!

Another thing I began to do is notice when I zoned out. For example, I zoned out while eating. I’d usually enjoy the first taste of my food, and then I’d get lost in thoughts or a conversation. I might even pick up my phone (again!) while I ate the rest of my meal. The next thing I knew, I’d cleared my plate. Staying present while eating proved to be a really big challenge. Although I enjoyed food, I didn’t really notice eating it very much. My mind drifted quickly. I had to really slow down, to deliberately put down my knife and fork between mouthfuls and actively try to notice what I was doing. And again, a revelation: I found I enjoyed food more, and I was also much better able to notice when I was full.

As I practiced these things, I began to realize everything in life can be a meditation. Slowly, I began to make even menial tasks into meditations. I tuned in with the same mindful awareness that is part of my yoga practice. At first, I thought this would be boring. How would I cope with doing the dishes without mentally planning my next trip abroad, for example? But I found when I tuned in to the sensory experience of what I was doing—the way I moved, the sensations I felt, and the sounds around me—even the most boring of jobs became absorbing. Just like with people, when you give tasks your full attention, the tasks become far more interesting. It turns out all you have to do is give yourself permission to enjoy them.

It’s taken a while, but I’d say now I’m fully present around fifteen percent of the time. It’s a three-fold improvement, but obviously I’ve got a long way to go. And I will continue the journey, because when I’m present, I feel better, calmer, and, best of all, more aware of the great things that happen all the time. That awareness is the true gift of being in the present moment.

Jade is a traveling yoga teacher and writer based in Europe. You can read more about her yoga adventures at www.jadelizzie.com.