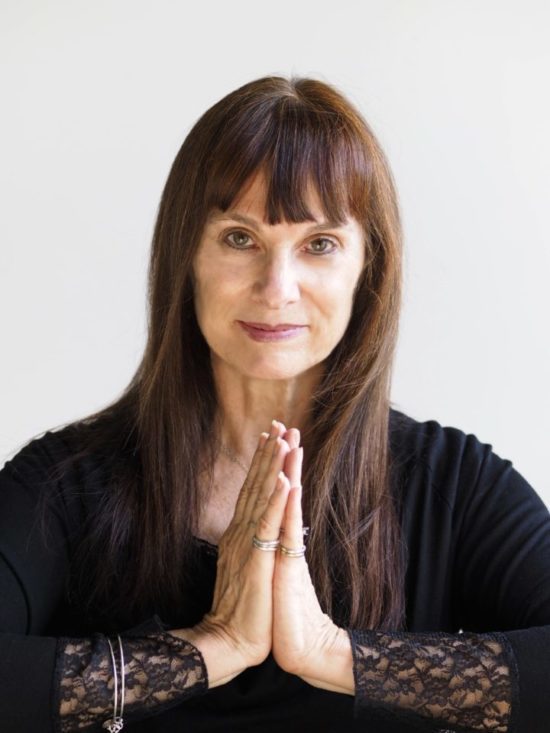 I was raised on a steady diet of fear. My parents loved me deeply, but in their attempts to keep me safe, they instilled a distrust of the world. Fear was a four-letter word that haunted me from the moment I got up each morning until I went to bed at night (and often in my dreams as well). When I later became a mother, my fear magnified, and I realized if I didn’t work on becoming fearless, I would surely pass my fearful outlook onto my three sons.

How I Turned to Yoga

The summer my middle son was about to turn 16, he asked if he could study abroad in England. My initial response was negative, because of my fear of him traveling far from our New Jersey home. (Fear had kept me from flying for many years). However, I’d become so weary of carrying the heavy burden of fear that I decided to see a therapist. She suggested yoga, and that was the beginning of my profound transformation.

Becoming Fearless: Lessons from the Mat

Fear is built upon suspicion and mistrust; a fearful person is suspicious of everyone, including the self. For the fearful, even the Divine is untrustworthy; after all, how could God let bad things happen in the world if he/she is on our side? Yoga transports us from fear to fearlessness because it teaches us to trust.

Like many practitioners, I focused mainly on asana when I began. But before long I recognized the poses were giving me far more than physical flexibility, balance, and stamina. Yoga was guiding me into my own heart, where I was beginning to discover a new kind of bravery. My thoughts were becoming more balanced and flexible as well.

In the second year of my practice, I was diagnosed with breast cancer. To someone (like me) who faced life with fear, cancer would certainly have been a terrifying, overwhelming foe. But yoga had given me some essential and hitherto unknown tools. I could now, for one thing, breathe. I could slow my breath, follow my breath, and calm myself in a way that was never before conceivable.

Yoga had also given me positivity. I no longer saw the world as glass half empty. Of course, cancer frightened me, but I combatted my fears with affirmations, mantras, healing visualizations, breath work, and unwavering trust. In addition to medical treatment, I battled cancer not with weapons and threats (the tools of fear), but with love, family, friends, healing foods and supplements, rest, self-care, spiritual nourishment, prayer, and of course, yoga.

A few years into my recovery, I boarded an airplane for the first time in decades, traveling to New Mexico for a yoga event, and then later to Japan, and China. I opened my heart to a new world of possibility, and became a Kundalini yoga teacher. I encouraged my children to travel as well—as teens and young men they have been as far away as Qatar, Hong Kong, and Thailand on their own.

But perhaps the greatest tool for becoming fearless, and the greatest gift I was offered by yoga, was the present moment. Before yoga, I spent my life in fear of the future, in fear of what might happen, of what could happen. “What if?” had been my mantra instead of “What is.”

For me, becoming fearless is not about skydiving or enlisting in an army (you won’t find me doing either!) Fearlessness is finding the courage within your own heart to embrace whatever your life offers in this– and in every–moment. Fearlessness requires trust—yes, even in the face of cancer, suffering, or death. With trust, fear vaporizes, replaced by the knowledge that the present moment is all there ever is.

The Present Moment is Safe

Yoga has taught me that true bravery is being equally present for the joys, the sorrows, and the challenges. Fear dwells and grows in the uncertainty of the future: its greatest adversary is a yogi (or yogini!) who trusts and lives in the all that is now.

A writer and Kundalini Yoga teacher, Kathryn is the author of the memoir “Yin, Yang, Yogini: A Woman’s Quest for Balance, Strength, and Inner Peace” (Open Road Media)